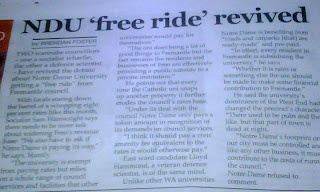 Sam Wainwright is one of two Fremantle Council candidates who have called for Notre Dame University to pay its way. The Fremantle Herald reported the views of Sam and Lloyd Hammond in its August 1 edition.

The paper quoted Sam saying that "the university is exempt from paying rates but relies on a whole range of council services and facilities that other universities would pay for themselves".

Further: "I think it should pay a civic amenity fee similar to the rates it would otherwise pay."

The Fremantle council is considering an 8% rates increase for residents.
Posted by Alex Bainbridge at 9:18 PM