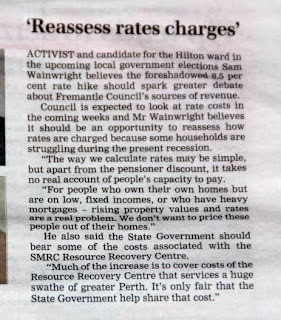 "Activist and candidate for the Hilton ward in the upcoming local government elections Sam Wainwright believes the foreshadowed 8.5 per cent rate hike should spark greater debate about Fremantle Council's sources of revenue," the paper reported.

"The way we calculate rates may be simple, but apart from the pensioner discount, it takes no real account of people's capacity to pay," Sam is quoted as saying.

The paper also reported: "He also said the State Government should bear some of the costs associated with the SMRC Resource Recovery Centre."
Posted by Alex Bainbridge at 10:03 AM