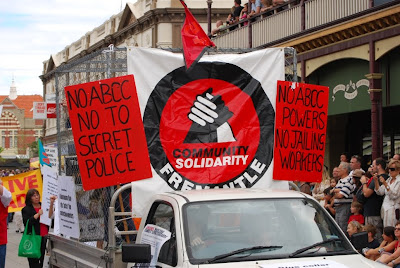 On Tuesday August 11 a worker on a city construction site survived a near fatal accident after falling fourteen metres down a lift shaft. On the same day Adelaide construction worker Ark Tribe had to face court, with the threat of six months jail hanging over his head, for refusing to cooperate with the Howard-era Australian Building and Construction Commission investiagtion of a safety dispute at his worksite.

"This is further proof that not only are the ABCC powers a breach of civil liberties, but they are impeding the work of occupational health and safety delegates and placing peoples lives at risk" said resident Dave Fox. Fox is a boiler maker, an activist in Community Solidarity and State Vice-President of the Australian Manufacturing Workers Union. 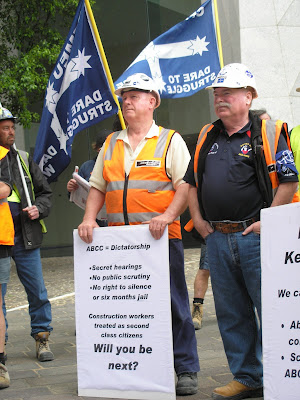 He continued, "Industries such as construction, mining, off shore oil and gas and stevedoring are some of our most dangerous. Workers in these fields need to be able to identify and combat safety hazards. But instead they have had their basic civil liberties stripped away by the ABCC which takes away their right to silence, deprives them of regular legal representation and conducts its hearings in secrecy."

He concluded, "Julia Gillard is wrong to say that these powers are still necessary. Blue collar workers are not terrorists. We deserve the same rights as the rest of the community." 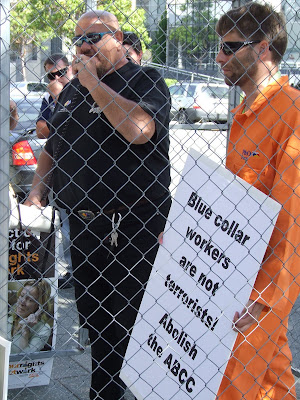 Fellow Communty Solidarity activist and Maritime Union of Australia wharfie Sam Wainwright said that Rudd and Gillard had broken their election promises by not abolishing the ABCC and all of WorkChoices. "Federal Labor's legislation has only made minor changes to the WorkChoices regime. Their legislation is still in breach of International Labour Organisation standards."

Wainwright said that it was time for former human rights lawyer and Fremantle MHR Melissa Parke to take a stand, "Melissa has spoken to our union meetings and said that she is personally against the continuation of the ABCC powers and we believe her, but now is the time to speak out publically. We know she'd cop the wrath of the Labor caucus, but lives are at stake and this is no time to sit on the fence."

Included in this post are photos of the Community Solidarity members on the campaign trail against the ABCC.

For general information on the campaign against the ABCC go to:
www.rightsonsite.org.au
Posted by Alex Bainbridge at 1:14 PM