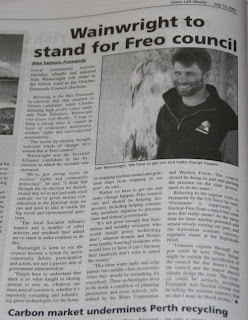 [The following article appeared in the July 15, 2009 Green Left Weekly.]

Wainwright was the Socialist Alliance candidate in the by-election in which the socialist vote increased.

“We’ve got strong views on workers’ rights and community democracy”, he said. “I think that through the by-election we demonstrated that we’re not just wide-eyed radicals: we’ve given serious consideration to the practical steps we can and need to take to tackle the big social and environmental questions.

“The local Socialist Alliance branch and a number of other activists and residents have asked me to stand in order continue to do this.”

Wainwright is keen to see the council become a forum for active community debate, participation and action, not just a passive arm of government administration.

“People have to understand that there is no white knight in shining armour to save us, whatever our main area of concern is, whether it’s massively extending and subsidising green technologies for the home or stopping nuclear-armed and powered ships from stopping in our port”, he said.

“Rather we have to get out and make change happen. Freo council can and should be helping this process, including helping community members organise to pressure state and federal government.

“It’s not good enough that businesses and wealthy residents who could install green technology don’t, whereas tenants and Homes west [public housing] residents who would love to have it can’t because their landlords don’t want to spend the money.

“This turns water tanks and solar panels into middle-class accessories when they should be something for everybody. These technologies need to be made a condition of planning permission and more actively subsidised by the Water Corporation and Western Power. The council should be doing its part and putting the pressure on the state government to do the same.”

Referring to the regular visits to Fremantle by the US Navy he said: “Fremantle is supposedly a Nuclear-Free Zone council but what does this really mean? At the same time we have nuclear-powered and armed vessels visiting our port, and the Australian uranium industry regularly meets at the Esplanade Hotel.

“Uranium exports through our port could be next. These things might be outside the jurisdiction of the council but that doesn’t mean the council and the mayor should silently dodge the issue. The council could be actively assisting Fremantle Anti-Nuclear Group and be telling the uranium industry that we don’t want its blood money.”
Posted by Alex Bainbridge at 4:48 AM