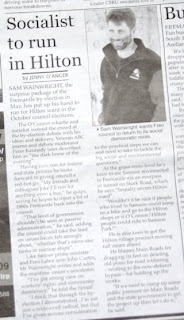 The Fremantle Herald reported the Sam's candidacy for the Fremantle council under the banner headline "Socialist to run in Hilton" in the July 11 issue.

"Sam Wainwright, the surprise package of the Fremantle by-election in May, has put up his hand to run for Hilton ward in the October council elections," the paper reported.

"The O'Connor wharfie and socialist wowed the crowd at the by-election debate with his ideas and his delivery," the paper said.

Sam told the Herald "I've got strong views on workers' rights and community democracy" and that "I think that through the by-election I demonstrated ... I'm not just a wide-eyed radical, but that I've given serious consideration to the practical steps we can and need to take to tackle the big social and environmental questions".
Posted by Alex Bainbridge at 12:34 PM