Sam has launched a new website - FreoReport.net - to let residents know about what's going on at Fremantle Council.

From the site, residents can also subscribe to Sam's email list which will cover reports from the council and other issues affecting the people of Fremantle.

"Of course the council itself publishes minutes but I will be aiming to give people a bit of more of a sense of who said what and also about the kind of action people can take to make a difference on the important issues before council."

This website will no longer be updated and new info will go on FreoReport.net.
Posted by Alex Bainbridge at 7:00 PM No comments:

Rally to defend the public sector

The Barnett government has embarked on a major assault on the public sector in WA and all workers and members of the community have an interest in seeing these attacks defeated.
I'd strongly urge you to get along to the rally being planned by the Civil Service Association on Thursday March 11.
For more info check out this Green Left article or click on the image to the left to visit the CSA website.

Posted by Alex Bainbridge at 5:01 PM No comments: 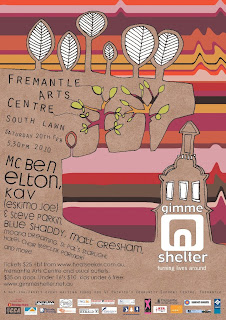 Hi, I've been asked by Dave Johnson to pass on notice about this upcoming event at which all profits will be used to support the homeless. If you're interested, I'd encourage you to make it along to the Fremantle Arts Centre on Sat 20 Feb to support a good cause.
Posted by Alex Bainbridge at 12:20 PM No comments:

Unions: Part of the Fremantle Community

Join the combined union contingent in the Fremantle Festival Parade 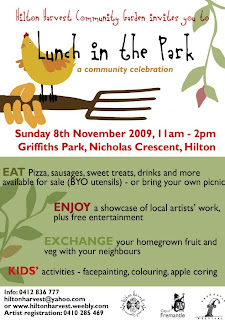 On Sunday I attended the "Lunch in the Park" put on by the Hilton Harvest Community Garden
Posted by Alex Bainbridge at 11:16 AM No comments:

Around a thousand people rallied to show the continued and determined oppostion to the proposed Roe 8 extension that would seriously damage the Beeliar Wetlands. Local residents, state MPs, local government representatives and members of the Nyoongar community all addressesd the rally.

A number of speakers emphasised how expanded rail freight and public transport infrastructure would be a far better alternative to the endless expansion of freeways to cope with increased road congestion.

Congratulations to the Beeliar Heritage and Conservation Council for organising such a spirited and colourful display of opposition to Colin Barnett's freeway addicted madness.

To find out more or to get involved in the campaign go to http://savebeeliarwetlands.com/

[Photos by Zeb Parkes.]
Posted by Alex Bainbridge at 11:12 AM No comments: 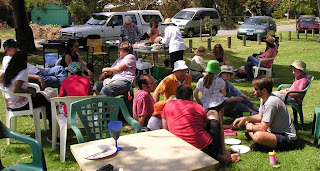 Congratulations to everyone who made the community BBQ in Grigg Park on Sunday October 25 such a success.
Posted by Alex Bainbridge at 11:14 AM No comments:

Travel back in time, dust off your cool threads and get crazy for a cause at the Duck and Cover Hop – Fremantle’s first and finest retro radioactive ball.

Dance the night away to Harry Deluxe and DJ Atomic ‘Burn’, with special appearances by the radioactive ladies of Sugar Blue Burlesque and the Swing Academy.

Posted by Alex Bainbridge at 10:26 AM No comments:

GRIGG PARK, SUNDAY 25 October 2009 from 12.00 noon Sausages & buns provided, soft drinks for sale. The entire community is invited to join in and reinvigorate the community spirit of Hilton. Come along to visit with your neighbours, meet new ones and make new friends. If you are able, please bring a salad or sweet to share, but most importantly, just bring yourselves. Mary Barton Suburb Manager Neighbourhood Watch Hilton nhwhilton@gmail.com.
Posted by Alex Bainbridge at 10:25 AM No comments:

Thanks to all who supported my campaign 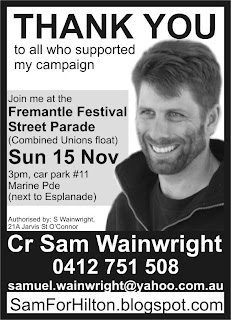 [On the right is a paid advertisement in the Fremantle Herald. Below is the text of a letter I've submitted to the Herald.]

I’d like to extend a big thanks to everyone who supported my council election campaign. I believe council can and should be trying to get greater community participation in decision making, involve in community life people who are often excluded, take a lead on protecting the environment and stick up for workers rights. If I can make even a small contribution in this regard it will have been worthwhile.

I’d also like to acknowledge the other candidates for Hilton Ward. We’re all pretty passionate about our ideas on how to improve our community, but there was no mud-slinging or dirty stuff. Outgoing councillor Alice King as well as fellow candidates Bob Smith, Dave Hume and Frank Acocella were all quick to wish me well and I thank them for it.

Furthermore there were some areas where we were in strong agreement; such as the desperate need for proper public toilets that meet modern accessibility requirements at the Hilton shops, and improving public transport use through a Fremantle Free Transit Zone and an eastern CAT service reaching into suburbs such as Beaconsfield, Hilton and Samson. I hope we can make some progress on these two issues soon.

Sam Wainwright
(Councillor, Hilton Ward)
Posted by Alex Bainbridge at 10:20 AM No comments:

Sam sworn in to council 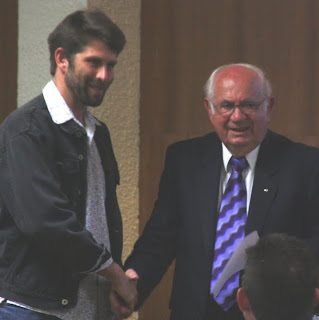 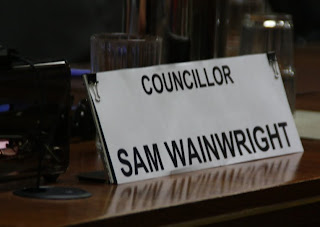 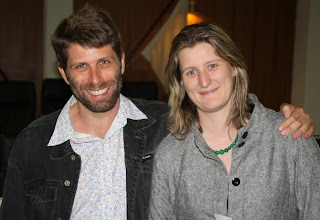 Sam with campaign manager Justine Kamprad
Posted by Alex Bainbridge at 11:26 AM

Newly elected Hilton councillor Sam Wainwright summarised what he saw as the significance of his election to Fremantle Council, “It’s a victory for all those like me who believe that the council can and should play an active role in involving people in decision making, protecting the environment, campaigning for workers rights and making a place in the community for people who are too often left out, such as indigenous Australians or people with disabilities.”

Wainwright is a Co-convenor of Socialist Alliance in Western Australia and activist in the Maritime Union of Australia. He said, “I think I’m the first socialist elected to public office in WA for a long time, if not ever. Most candidates for council try to appeal to the middle ground and keep their political affiliations quiet. I don’t believe in that approach. I think it’s better to be upfront about your beliefs. Throughout the campaign I emphasised that I was a staunch socialist, unionist and environmentalist.”

He added, “I didn’t expect everyone to sign up to everything I stand for. But I did ask people to believe that I would be a hard working campaigner for their rights. I’m really grateful and humbled that so many people have shown their confidence in me and saw my background as a positive.”

Wainwright thanked the diverse range of people that supported his campaign, “Active support came from all sorts of places: members of Socialist Alliance, the Greens and the ALP all pitched in; many unionists and community activists helped out; and last but not least, everyday residents who don’t wear a political label but want to see the sort of change that we talked about in the campaign. The election result belongs to these people and I know that the hard work now begins.”

Commenting on the mayoral election Wainwright said, “With three different Greens members running for mayor I was worried that they would takes votes from each other and allow a more conservative candidate to win. However Brad Pettit’s win was emphatic and I extend my congratulations to him for his strong and vibrant campaign. There has been a real changing of the guard on the council and I expect there will be some passionate and intense debate about the future of Fremantle. I think this is a good thing and will be arguing my case like everyone else. At the same time I pledge to work constructively with the rest of council where we can find common ground on the way forward.”
Posted by Alex Bainbridge at 7:51 PM No comments:

Victory for Sam by 100 votes

Sam Wainwright won 438 votes (33.44%) - over 100 more votes than Sam's nearest competitor and enough to put him over the line for the Hilton Ward of Fremantle Council.

At a victory celebration last night, Sam told supporters that this victory was for the whole Socialist Alliance and the diverse supporters of his campaign. He was proud that this campaign had been successful while being fully open about his socialist, environmentalist and unionist convictions.

Sam is the first Socialist Alliance member to be elected to a local government position in Australia.
Posted by Alex Bainbridge at 7:30 AM 59 comments:

What I stand for

You can see a summary of what I stand for...
By clicking on this link

or Downloading my election flyer which covers these points:

I’m committed to dramatically improving public transport services. We need to organise to put pressure on the state government to spend more of the billion of dollars in mining royalties on public transport infrastructure. This is vital to make a more liveable city and to reduce our greenhouse gas emissions. A good first step would be the introduction of a CAT service linking Fremantle to Beaconsfield, Hilton and Samson. We also need a Free Transit Zone such as already exists in the Perth CBD. We also need to build an extensive light rail network to move tens of thousands out of their cars and into public transport.

For a great vision of what such a system could look like check out this plan developed by Greens senator Scott Ludlam.

Posted by Alex Bainbridge at 11:57 AM No comments: